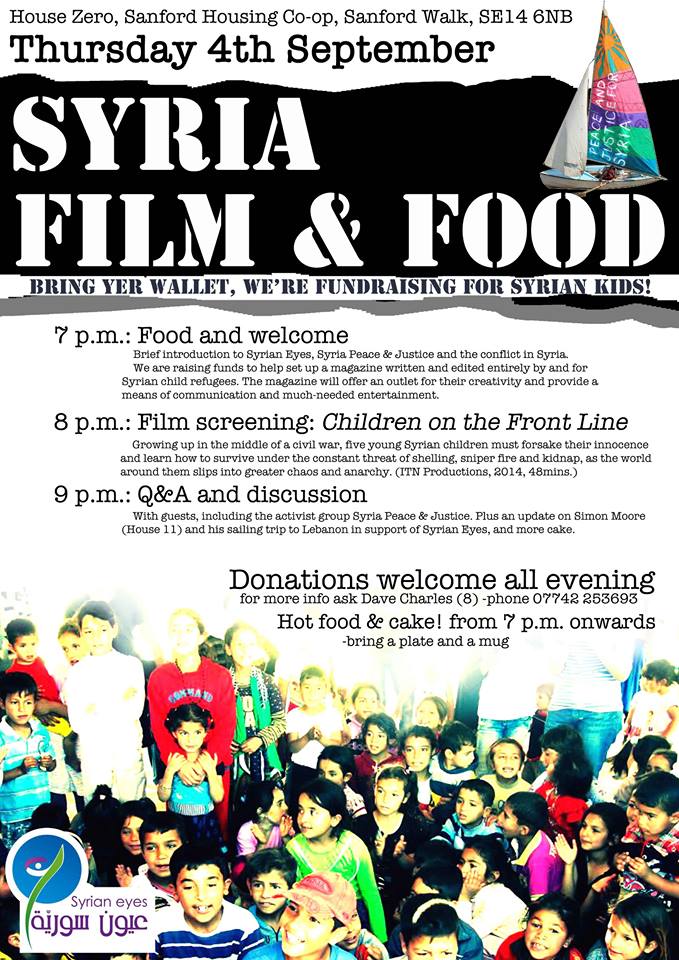 Come and enjoy delicious hot food, cake and a thought-provoking film about the civil war in Syria and its impact on the lives of children (Think of the children!).

~ Full Details of the Evening ~

Brief introduction to Syrian Eyes, Syria Peace and Justice and the background to the conflict in Syria.

Syria Peace & Justice are currently seeking to raise £1200 to sponsor the production of a children’s magazine. The content of the magazine will be written and edited entirely by Syrian refugee children living in the Bekaa Valley of Lebanon and aims to give an outlet to their creativity and provide a source of entertainment. Syria P&J aim to reach the target amount by 1st January 2015.

This project is being conducted in co-operation with the group ‘Syrian Eyes’: a grass roots group made up of mostly young non-paid Syrian refugees based in the Beqaa valley in Lebanon who formed in October 2013 with the aim of identifying and providing for the needs of Syrian refugee families in Lebanon and is entirely volunteer run. Since that time they have also assisted the UNHCR by helping to deliver aid packages to many different refugee camps.

The children of Syria are often the forgotten victims in the ongoing civil war. More than 11,000 children have been killed and over a million are now refugees.

Syria’s largest city, Aleppo, has become engulfed by fighting between pro- and anti-regime groups and over 2000 children have been killed there. Schools have shut, food is in serious shortage and there is the constant threat of shelling, sniper fire and kidnap.

This Dispatches documentary tells the story of five young children whose lives have been changed forever by the war in Syria: young sisters Helen, Farah and Sara and their brother Mohammed, whose father is a rebel commander in Aleppo; and Aboude, a singer and poster boy for the Syrian.

All five have shown amazing resilience, forsaking their innocence and adapting to life, as the world around them slips into greater chaos and anarchy.

21:00 – Q&A and discussion with guests, including the activist group Syria Peace & Justice. Plus an update on Simon Moore (House 11) and his sailing trip to Lebanon in solidarity with the Syrian people.