Maria and Simon set off from central London on their Sail 4 Syria odyssey to Lebanon yesterday afternoon.

After spending last night in South Dock in Rotherhithe, this afternoon they will continue eastwards past the Thames flood barrier in Woolwich.

Please support Maria and Simon in any way you can, such as by making a donation to Sail 4 Syria and/or the Syrian Eyes appeal.

http://www.demotix.com/news/5239889/sail-4-syria-starts-gabriel-wharf-london#media-5239857Click here for a link to a video featuring interviews with Maria and some other Syria Peace & Justice group members. 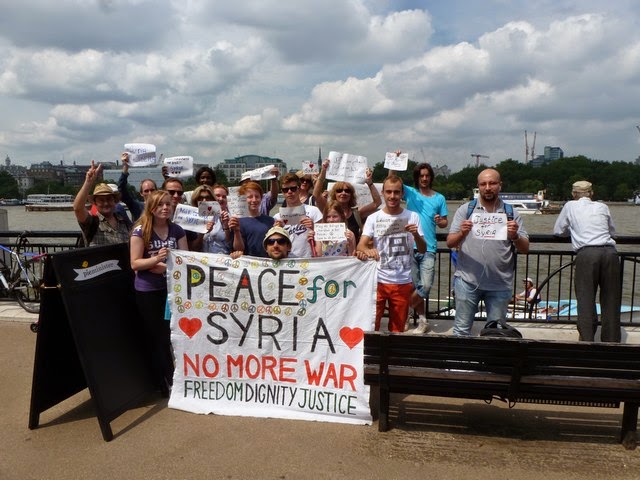 Syria Solidarity activists to sail from London to Beirut

Sail4Syria duo to depart from the shore of the Thames at The South Bank (the beach next to Gabriel’s Wharf), London, Saturday 12th July 2014 at 3 p.m. (click here for map)
On Saturday 12th July, following several months of preparations, two peace activists, Maria Gallastegui and Simon Moore, will embark on a sailing voyage of over 3500 miles from London to Beirut, Lebanon.  This action is in solidarity with the people of Syria. They will travel aboard ‘Rumi‘: a 16-foot Wayfarer dinghy.

Maria Gallestegui on board ‘Rumi’. Sail designed and painted by artist Helyn Gulley.

The aims of Sail4Syria (S4S), which is a project of London-based Syria Peace & Justice (SPJ) are as follows: [1]·

SPJ is calling for non-violent action to highlight and challenge the above behaviour and encourage a responsible, compassionate and peaceful approach to the Syria crisis from the international community.

The S4S team is seeking to link up with like-minded groups and individuals as it passes through various cities, towns and villages along its route.

SPJ and S4S will soon be announcing the sponsorship of a children’s activity project for Syrian refugee children, in co-ordination with Syrian Eyes. [2]  This will be published via the Syria Peace & Justice website.

1. Syria Peace & Justice (SPJ) is an open, London-based non-sectarian grassroots group, formed in October 2013. It wishes to promote a peaceful end to the terrible conflict in Syria and justice and human rights for all of its people.

More information about the group and updates on the progress of the Sail4Syria (S4S) voyage can be found at:
http://www.syriapeaceandjustice.wordpress.com

2. SPJ and S4S are currently supporting one group called Syrian Eyes, which is made up of mostly young unpaid Syrian refugees who dedicate their time to providing for the needs of the Syrian refugee families in Lebanon.

Syrian Eyes’ main method of communication with the wider world is through their Facebook page. This is mostly written in Arabic, but does allow non-Arabic speakers to see many photos illustrating their activities in Lebanon. Syrian Eyes describes itself thus*:

“Seeks to provide immediate relief assistance to the displaced people in the Syrian refugee camps in the State of brotherly Lebanon, in addition to the establishment of a small development projects to improve the living conditions of the inhabitants of these camps as much as possible.”
*auto-translation from Arabic;